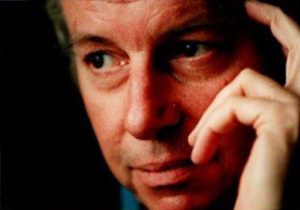 Born in 1940, English journalist Grundy grew up with fervently fascist parents, Sidney and Edna. They were ardent supporters of the British Union of Fascists leader, Sir Oswald Moseley, even before World War II and considered old guard.

Trevor literally sucked up fascist ideas with his mother milk. He had no friends apart from Black Shirts. The Grundys only read newspapers and political pamphlets. Prejudice, intolerance and lies were coupled with deep love of their “leader,” Mosley. Hitler too was a cult figure of Trevor’s youth. No wonder that at seventeen he gave a fiery speech for the movement at Trafalgar Square.

Already as a toddler he knew his father’s favourite song in English, the Nazi’s “Horst Wessel” song.

This was the same song belted out by Hitler Youths, terrifying me as a nine-year old in the streets of Nuremberg, as they marched past my mother and myself.

A few weeks ago I received an e-mail from Trevor Grundy. He was the colleague who had taken over from me at the Times of Zambia and as Financial Times correspondent after I joined the Voice of Germany. I was glad to hear from him, though we had not seen each other for some 45 years.

I had no idea of his fascist past, which came as a shock. Nor had I known that in 1998, he had published, Memoir of a Fascist Childhood: a Boy in Mosley’s Britain,  a brutally honest account of his first twenty years, which were dominated by anti-Semitism, racism and hate.

It is more than commendable that given his distorted upbringing, Trevor began to question his parents and the movement’s views. As one reviewer noted, decency and truth prevailed. The young man broke loose and took flight, spending almost all his working life in Africa.

Grundy’s memoir gives an insight into the psyche of such individuals as the perpetrator who attacked the synagogue in Halle last October, on the Jewish Day of Atonement. He was prevented from staging the planned massacre by the strength of a door, so that in frustration he turned his gun on two unfortunate victims on the street.

Trevor Grundy revealed how often people settle on a scapegoat who can be blamed for their failings and fate. This allows them to think unbelievable allegations are true, such as the illogical belief Jews were responsible for Germany’s defeat in the first of the World Wars and the Allies’ Declaration of War in the second. Or as Germans say: Jews and bicyclists are to blame for everything!

Unfortunately this is not past history but part of current affairs. In 2019 more than 1200 anti-Semitic attacks were recorded in four German states alone. An AfD (Alternative for Germany) party representative claimed in 2018 that the ‘Central Council of Jews’ allegedly used “Islam” in order to turn Germany into a multi-cultural society. In the US, the number of anti-Semitic assaults and acts of vandalism, and harassment rose in 2019 to an all-time high of 2000, the highest since the Anti-Defamation League started keeping records over 30 years ago.

Ghosts of the Nazi era and earlier times have re-emerged. As happens so often during a crisis, Jews are currently blamed by anti-Semites for Covid-19, reflecting the familiar antiseptic trope connecting Jews with disease. In Bavaria, masks have appeared at demonstrations with yellow stars and slogans such as “anti-vaccination”.  At one lockdown protest, placards were warned of a “social holocaust”. During the plague years of the 14th century, Jews were alleged to have poisoned the wells, despite Pope Clemens VI declaration that this was false.

Prejudice can only be defeated by means of commonsense and human decency, as Trevor Grundy proved.