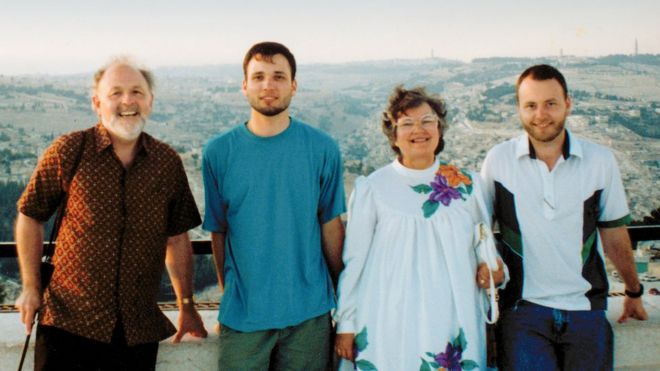 ( Source: bbc.com/ The brothers behind the Uk’s only holocaust museum)

Last week I received an email from Marina Smith, a remarkable woman updating news of her remarkable family. Together with her two sons, she created the only official National Holocaust Centre and Museum in the UK.

The eldest son the genocide expert Dr. Stephen Smith had a message about racism, namely that things won’t change ‘unless people are prepared to change and listen to one another.’

A sad comment, as Dr. Smith a Christian pastor with a Jewish wife, is each day concerned with the Holocaust as he runs USC Shoah Foundation with its 55 000 testimonies, which Stephen Spielberg had started. He described his multi-cultured family as consisting of a Christian parent, a Jewish parent, Jewish stepchildren, also Asian-British-American children with his Asian ex-wife, while his daughter’s best friend, who lived with them was black. His brother Dr. James Smith, a doctor and also a genocide scholar, was married to a Rwandan, so that his daughter is a second-generation Rwandan genocide survivor. He adds the Smiths up as: 3 Brits, 5 Jews, 4 Asian-Americans, 4 white Christians, 2 black people of African descent. They certainly live with acceptance of diversity.

The Smith family fascinated me for decades. I’m grateful to be in touch with Marina. I owe this to my friend Liesl – Lisa – one of the 10,000 children accepted by Britain after Germany’s 1938 November Pogrom. On one of her usual long walks in Sherwood Forest, Lisa passed an estate with the sign Beth Shalom – and met the Smiths. She was to become a close friend and addressed many audiences to talk about her family under the Nazis. My first visit to Beth Shalom and the Smiths was unforgettable. With its beautiful garden of remembrance it is still the home of Marina and her husband and today the UK’s only National Holocaust Centre.

As for its history: the lives of the four Smiths was changed by a 1991 visit to Yad Vashem, which had shaken this devout Christian family. Then young Stephen and James felt there was insufficient education about the Holocaust in schools and universities. Stephen, James and Marina set about changing this and created the information centre Beth Shalom after years of fundraising. Since then it has developed into a major international institution. Stephen and James became authorities on the Holocaust and genocide. In 2000 they created the Aegis Trust in response to the Kosovo crisis. Aegis works to prevent genocide and atrocities. Aegis is responsible for the Kigali Memorial Centre where 250 000 victims of the 1994 genocide are buried and additionally campaigned against human rights violations in Darfur, Sudan.

It is one of those stories where individual efforts are amazingly effective, which warms the heart and provides hope. In spite of everything.

( Source: bbc.com/ The brothers behind the Uk’s only holocaust museum) The Smiths- German
Scroll to top