The 60th Anniversary of the Independence of the Congo 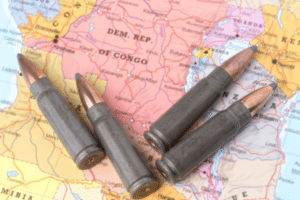 Congo and Chaos: it became synonymous after the sudden independence of the Democratic Republic of Congo (DRC) from Belgium on the 30th June 1960. This anniversary presents a chance to reflect on the miserable history of post-colonial rule.

The European powers bestowed the Congo on the Belgian King Leopold II during the 1884/5 Berlin Congo-Conference. Leopold II treated this heart of Africa as his personal domain, exploiting and enslaving the local population brutally. In 1908, he was forced to hand the Congo over to the Belgian state. Belgium continued the inhumane administration until, unexpectedly and without due preparation, announced the Congo’s independence in 1960.

Leopold II treated this heart of Africa as his personal domain, exploiting and enslaving the local population brutally.

After the cruel colonial era, the second largest African state became the victim of exploitation by dictators, neighbouring states and foreign interests.  The blessing of its vast natural resources – coltan, copper, diamonds, gold, oil, platinum, uranium and rainforests became a curse. Corruption was bred. Human rights violations continued. Belgian companies tried to protect their privileges as did international companies and other governments, such as the USA.

Neither Belgian nor African politicians were able to establish an efficient government system. The judiciary is unjust. There is little security, with an undisciplined police force and a powerful military. Education, training and social  services are lacking. The Congo’s people are among the poorest of the world.

The murder of the charismatic leader Patrice Lumumba, and emergence of the dictator Mobutu followed, as did a confusing number of small militia and so-called “war lords”. All suppressed the population and exploited the county’s resources.

In 1961, the then UN Secretary-General Dag Hammarskjöld was killed in a controversial plane crash on his way from the Congo to Northern Rhodesia (Zambia) during a peace mission. [Photo: UN/1961]

Mobutu, who named the county Zaire, amassed an immense fortune at the expense of the people. Land reform and migration movements in neighbouring countries destabilised parts of Zaire. Tension increased, which again cost millions of lives. Following the Rwanda Tutsi-Hutu conflict with its merciless massacres,  Mobutu virtually lost control of the area in the East, bordering on Uganda and Rwanda. A UN presence was introduced, but it did not end the tension or conflicts.

In 1997, the dictator Mobutu gave  way to Laurent Kabila. Under the latter’s government, the conflict over DRC’s natural resources worsened. Competing interests of the government, rebels and various neighbouring states such as Angola, Namibia, Rwanda, Uganda, Zimbabwe furthered the chaos. The state failed in its protection of its citizens in the course of the series of civil wars, leaving them open to exploitation by different interest groups including local militia.

In 2001, Laurent Kabila was murdered, with his son Joseph taking his place. Neither conflict nor exploitation was ended. Despite the UN presence in the country’s East and attempts to broker peace, it was only in December 2019 that Josef Kabila could be persuaded to withdraw. The opposition candidate Felix Tshisekedi was pronounced the victor of the contested presidential election.

The DRC and its suffering peoples deserve a new start.