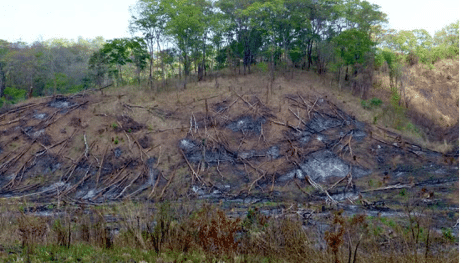 Almost 10 million hectare of forests vanish annually from our planet according to a joint August study of the FAO and the UN Environment Programme. The surprising and sad finding is that Africa has overtaken South America with 3.9 million hectares of forest lost annually compared with South America’s 2.6 million. Africa’s rapid population increase causes severe deforestation as peasants do what they can to acquire living space and arable land, while another reason is their need for fuel.

We all know that burning and destruction of rainforests affect the environment.

Rainforests, tall evergreen trees with high rainfall are the oldest living ecosystems, some surviving possibly 70 million years. They cover 6% of the earth and thanks to their complexity and diversity are home to more than half of all flora and fauna. They are found in every continent except in Antarctica. Rainforests produce water which is released into the atmosphere. When they burn, less water is released, which means less rainfalls.

Many medicinal plants including those used in cancer treatment come from rainforests, as do many other products.

However, rainforests have suffered from unsustainable industrial and agricultural development. This has been recognised, so that governments and NGOs are working to protect these fragile systems.

Last year the worst forest fires for over twenty years devastated Brazil, which had been extending to Bolivia and Peru.

Unfortunately, the destruction of the Brazilian rain forest has increased dramatically. During the past 12 months (August 1919 – July 2020) illegal deforestation had increased by a third. The worst fires of the past 13 years had raged in the Amazon district.

In the course of his election campaign, Brazil’s President Jair Bolsonaro had declared the Amazon district would be further developed without new protection areas for the indigenous people.

This has met with strong criticism and the G7 States have declared that new investments would depend on concrete steps taken against the destruction of the rainforests.

Experts see no concrete trend of change as yet, with few governments in either continent ready to stem the tide. They point out that the fires are only one of the threats against the protected areas of indigenous people. Others are posed by gold diggers, cattle owners and illegal intruders.

As far as we are concerned, it is up to each one of us to do what he or she can to ensure that the forests and our entire environment are not misused and are well protected.