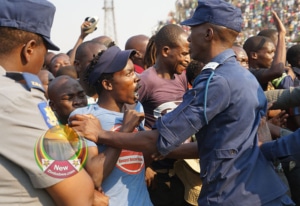 Last week, the Ambassadors of the USA, Great Britain, Germany, Canada, Netherlands, Norway and Poland  issued an unusually sharp reprimand to Zimbabwe’s government, demanding that it should not use the Corona virus situation as an excuse to clamp down on dissent. Other critical voices were also heard in view of the brutal government action with regard to protests on the 31st of July, 2020, against the political and economic crisis which beset the country. The Catholic Bishops issued a letter deploring human rights violations, the economy’s breakdown, corruption and poverty. South Africa sent a delegation to Harare offering to help, only to be told there was nothing to discuss.

President Emmerson Mnangagwa reacted furiously. The Bishops were accused of siding with the opposition, the President’s spokesman said the USA Ambassador ‘had expelled himself’ for interfering in the country’s affairs as he asked the Southern African Development Community to help Zimbabwe from descending into chaos.

The sad fact is that, despite his slogan that ‘Zimbabwe was open for business’ and that the country was rejoining the family of nations, Mnangagwa has not fought corruption nor has he introduced reform as promised. His tactics against dissent are no different from his predecessor and mentor Robert Mugabe. Abductions, torture are common such as arrests of investigative journalist Hopewell Chin’ono and opposition politician Jacob Ngarivhume before the protests.

Yet while Mnangagwa is at odds with the West, he is desperate for help. Food is scarce, power and water problems are serious, annual inflation in Zimbabwe accelerated to 837.53% in July. The Zim dollar reintroduced after 10 years is in trouble.

Mnangagwa’s talk of $27 billion in planned investments or a 30-year bond in international markets to cover US$3.5 billion for white farmers evicted two decades ago from the land is a delusion. Foreign investors don’t trust Mnangagwa. Zimbabwe has defaulted on loans since 1991 and owes some US$8 billion to institutions such as the World Bank and African Development Bank. The plea for debt relief to the Paris Club which is owed $3.26 billion was rejected. The creditors want Zimbabwe to first improve its human-rights record and pay outstanding arrears. Nor has the country been granted a share of the US$50 billion the International Monetary Fund made available to offset Coronia-19. The people of  Zimbabwe are left with critical questions. Quo vadis Zimbabwe? Where are you marching to?