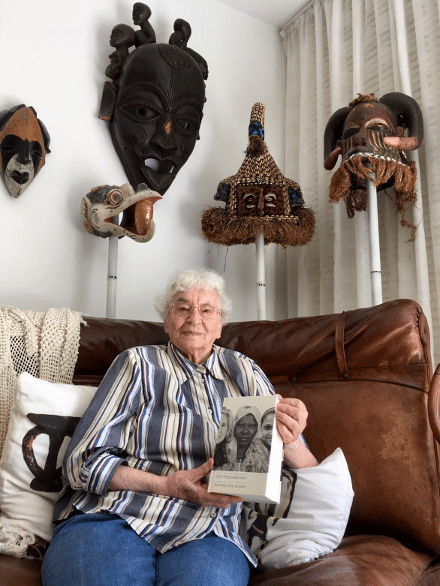 In 2005, Ruth Weiss was nominated as one of one thousand women to receive the Nobel peace prize. It was to recognize 1000 women working quietly and selflessly for peace across the globe.

This link is to an interview with Ruth Weiss about the 1000 Peacewomen Across the Globe Nobel Prize nomination and her work fighting intolerance in all its forms. Much of her work has focused on the role of women.

I was stunned at the nomination. After all, the courageous women whose names I knew had served humanity selflessly. They had fought for the rights of women and against abuse such as female circumcision, which caused immense suffering to innumerable women. Others had been jailed for their work. The published volume contains descriptions of each of the 999 women’s contributions –  one is anonymous to represent All Women.

I cannot claim that my pen was more powerful than a sword, for in the context of my opposition of racism in all its forms, this would not be correct. However in this volume it is stated that I waged war with my typewriter. I can only say, I did, what I could, given my circumstances.

However, my life was enriched by having met many of these extraordinary women (among them a young blind woman) who dedicated their lives to the underprivileged or the excluded such as the lepers.

Their consistency and unpublicised service was and is admirable. It is to such women that one owes continued faith in the good of mankind, even if it exists side by side with prejudice and evil.

To learn more about the Nobel initiative, 1000 Peacewomen Across the Globe, read the English version of the book profiling each woman, giving an insight into their lives in 150 countries around the world. The book was honoured by the Swiss Federal Office of Culture as one of the Most Beautiful Swiss Books 2005. Here is the link to the online German version. The Ruth Weiss Gesellschaft (Ruth Weiss Society) supports activities that link Ruth Weiss to the 1000 Peace Women, now a thriving global organisation. Stay tuned for an event marking the 15th anniversary of Ruth Weiss’ Nobel Peace Prize nomination.