I keep going back to the March 2021 publication of the South African Daily Maverick of its explosive revelations of Zimbabwe’s State Capture through the corrupt network of politicians, military, secret service personnel, high civil servants and business people. This dates back to Mugabe and thrives under Mnangagwa. Such beneficiaries are named “rent-seekers”, which is undeserved or unearned profit gained by rent-seekers, which economists define as an “economic rent”.

The report explained that cartels had been formed, which hamper honest business transactions and rob citizens of a better life. The state is responsible for over-pricing, which means less medicine, fewer kilometre roads, more inadequate education and less private consumption for citizens, while the cartels absorb billions.

This development “contributed to deliberate missteps by public officials in policy-making which have led to significant deterioration in the macro-economic environment.“ The overpricing of goods and services procured by the state from cartels also delivers low value for money for taxpayers and citizens. 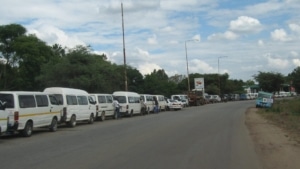 One of the many examples given is an illicit payment of Z$3.3-billion made in 2019 to Sakunda, a fuel company that has been accused of monopolising fuel supplies and owns the fuel pipeline from Beira to Zimbabwe. Sakunda was supposed to receive Z$330-million instead of Z$3.3 billion. To meet the shortfall, the Reserve Bank printed money, which “caused the overnight devaluation of the Zimbabwean dollar by 90%, eroding the incomes and savings of millions of Zimbabweans“.

A name that keeps turning up is Kudakwashe Tagwirei, an ally and advisor of President Emmerson Mnangagwa, whom he described as “a nephew”. He is the power behind Sekunda; the company said to have financed the “Commando Agriculture”. Mnangagwa introduced this project during Mugabe’s time to increase agricultural production, mainly the elite benefitted. According to media reports in 2018, Tagwirei gave luxury vehicles to President Mnangagwa, Vice-President Constantino Chiwenga, since deceased Minister for Agriculture Perrance Shiri and other ZANU-PF high-up officials. In a later court case, Chiwenga admitted to receiving a Mercedes Benz and a Lexus via the Command Agriculture Programme.

Tagwirei’s name cropped up in connection with the gold industry. Shortly after independence, the state acquired Sabi Goldmine through the Zimbabwe Mining Development Corporation (ZMDC) at a time of high gold prices. By 2002 the macroeconomic and political environment had deteriorated, while gold prices also dropped. The mine was therefore closed between 2002 and 2003. Gold prices recovered during the following years, but due to the continued poor macroeconomic and political environment, no investor was found to resuscitate the mine.  It was re-opened in 2016, with output at 240kg per year by 2018. The gold price had quadrupled over the last 25 years, attracting the interest of rent-seekers.

In mid-2020, when gold prices reached 25-year record highs, the media reported that the ZMDC was transferring its Sabi share to Landela Mining Venture, a subsidiary of Sotic International, owned by none other than Tugwirei. Allegedly Landela signed an agreement also to take over ZDCM’s interest in three other goldmines.

Tugwirei turned up in the midst of the pandemic when he opened two hospitals, which charged fees and were no doubt aimed at the rich, who were no longer able to travel abroad for medical treatment, as they had done in pre-Covid 19 days.

When Zanu-Youth leaders mentioned names of allegedly corrupt men, among these Kuda Tagweira, who had reportedly been involved in a Transport industry scandal, their allegations were not investigated; instead, they were removed from the party.