My Sister Sara Available on Amazon 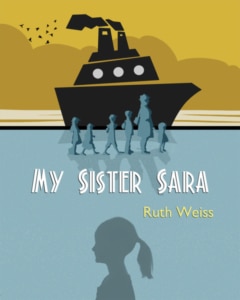 Video on My Sister Sara

My Sister Sarah unfolds shortly after the the Second World War when four year old Sara Lehmann came by boat to South Africa along with other German orphans. She is adopted by the Afrikaner family Leroux and lovingly given a home. The father, Pa, is enthusiastic about the blonde, blue-eyed adopted daughter he had wished for, particularly because of the pure German blood that will be good for his people.

Since her papers were delayed, Pa learns only later that Sara is Jewish. As a member of the Apartheid government and the secret Broederbond society, it is impossible for him to continue loving a Jewish daughter. But to give her up would mean losing face. He withdraws all affection from her, without ever explaining his reasons – she was only four. Her Jewish roots remained a guarded secret.

Faced with a choice between depression or rebellion, Sara chooses the latter. Her abject isolation fuels a brave struggle against injustice, cruelty and the normalcy of Apartheid’s racism as a teenager and university student.

Only much later – during a trial in which she is accused of violating an Apartheid law prohibiting intimacy between whites and people of colour does Sara hear about her Jewish origins. But, by then, her world is spinning out of control.