The Environmental Threat to Africa

As the hands of the environmental clock move dangerously towards its end, Germanwatch has issued a new Global Climate Risk Index 2021.

This has sounded the alarm for Africa. Malawi, Mozambique, Niger, South Sudan, Zimbabwe are included in the ten worst-affected countries by climate change. Their agriculture, infrastructure and vulnerable economies have already been damaged by cyclones and flooding, forcing governments and donor countries to provide instant funding for affected people and damage repair. 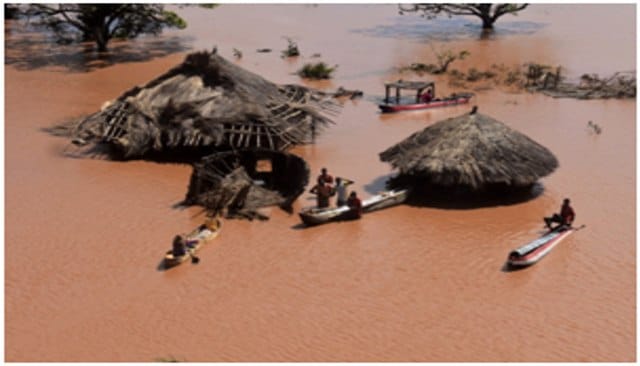 The first month of 2021 brought Cyclones Chalane and Eloise to Mozambique and Zimbabwe. The UNCED reported that 176,000 Mozambiqueans required to aid in the wake of Eloise. Of these, 20,000 were already displaced by cyclone Idai that caused suffering in 2019 in both countries, including 700 deaths in Mozambique and 347 in Zimbabwe.

Mozambique is the worst affected country in Africa on the Global Climate Index. The World Bank  stated that floods due to cyclones caused an average annual loss of $440m and  that, “limited fiscal space and social vulnerabilities in Mozambique are exacerbated by climate and disaster shocks impacting growth and development.”

Zimbabwe ranked second place on the Global Climate Index after suffering a 4.2% GDP loss and $1.8 billion in real monetary value in the wake of Cyclone Idai, needing $1.1 billion to rebuild infrastructure and to support livelihoods. This hampers infrastructure development elsewhere as humanitarian organisations redirect longer-term development funds to emergency response.

Of the top ten countries worst affected by climate change in 2019, Malawi is ranked in 5th place. Due to Cyclone Idai with heavy rains and strong winds, the GDP loss was 2.2% and $452 million.

South Sudan and Niger, in eighth and ninth place each suffered 0.7% GDP losses from severe flooding in 2019, causing losses of $85 million and $219 million respectively.

Such dire statistics surely must grab the attention of us all. Climate Action, Mitigation and Adaptation are vital for Africa and should be top of our agendas.

And should you be interested in who are the best and worst performers in the pursuit of climate action, Germanwatch has that information for you too, most countries’ results are so mediocre that the three best grades have not been attributed! No one can sit back.