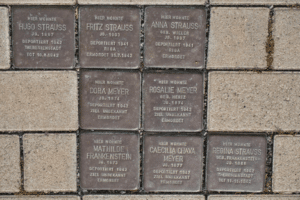 “Stolpersteine” (‘stumbling stones): These memorial paving stones record the deportation and murder of Dr Adolph Strauss’ brother Hugo Straus and their other family members. They are located outside the family house in Lüdinghausen, Germany as a memorial of their genocide and as a historical educational initiative.

Recently I was sent a cutting of the local newspaper in Lüdinghausen, Westphalia, where I had spent a happy decade before moving to my son and his family in Denmark.

It concerned the local history society, which hopes to raise funds for a memorial to two brave men and the man they saved. It is a heartwarming story of the Second World War, initiated by the historian Michael Kartelge, who has researched the history of the local Jewish community.

As in other small towns, Jews had found a home in Lüdinghausen, where mainly as traders, also cattle traders they had been integrated. And as had been the case throughout Germany, young Lüdinghausen Jews had served the fatherland as frontline soldiers during World War One.

Dr. Strauss fled Dortmund, walking to Lüdinghausen, where he called on two of his comrades of the First World War, Gustav Peik and the policeman Wim Schriever. 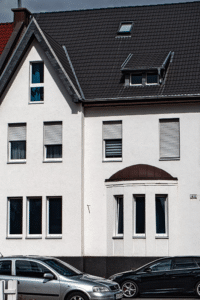 This is the house of Hugo Strauss and later of his brother Dr. Adolph Strauss in Lüdinghausen, Germany

One of these was Dr. Adolph Strauss, a veterinarian, who worked for many years at the Dortmund race course. Born in 1868, he had married ‘out of the faith’ at the age of 61. During the Nazi era he signed his property over to his wife Margareta Julia Luisa. As the war began to draw towards its end and Germany’s defeat loomed, partners living in a mixed marriage were also threatened. Dr. Strauss fled Dortmund, walking to Lüdinghausen, where he called on two of his comrades of the First World War, Gustav Peik and the policeman Wim Schriever. Strauss was hidden in the attic of his house by the businessman Peik, while Schriever ensured his friends’ safety by covering up for them.

In the course of the de-Nazification exercise, Dr. Strauss testified that Peik had granted him asylum ‘magnanimously and selflessly‘.  With the arrival of the Americans, Dr. Strauss moved to the house of his brother Hugo and sister-in-law Regina, who had been deported to Theresienstadt, where they were murdered.

Adolph Strauss lies buried with his wife in the Lüdinghausen Protestant cemetery.

One must be grateful for the bravery of men such as Peik and Schriever, especially in these turbulent days, when antisemitism is once more on the rise. As Michael Kertelge said, let us remember them.