Denis Goldberg, anti-apartheid fighter who was imprisoned with Nelson Mandala has died. 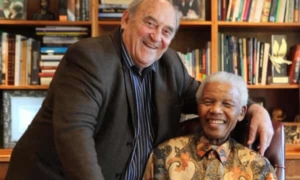 April 29th – Denis Theodore Goldberg, the ‘gentle giant’, has left us – to grieve, but also to celebrate a life of honesty, bravery and unswerving commitment to justice for all, a dear friend never to be forgotten. The only white man, who stood beside Nelson Mandela and six others in 1964 in the landmark Rivonia Trial, when these eight were sentenced to life imprisonment, of which he served 22 years, is no longer with us.

South Africa’s President Cyril Ramaphosa has fittingly announced a period of three days mourning for Denis, when flags will flutter at half-mast. A deserved honour for a man, whose endeavours, suffering – his life – have contributed to a free South Africa. He had one guiding principle: Never give up on the struggle for social justice.

“The only white man who stood beside Nelson Mandela and six others in 1964 in the landmark Rivonia Trial … is no longer with us.”

As the condolences and tributes flood in to his family, his ‘House of Hope’ for young people and the Denis Goldberg Legacy Foundation, many like myself reflect on their own experience of Denis.

Born in 1933 in Cape Town, his grandparents had fled the anti-Semitic horror of Lithuania in the late 1800s to London, from where his parents Sam and Annie emigrated to South Africa. Denis sucked up political consciousness in his parental home –  Sam was a member of South Africa’s small Communist Party. His parents were not religious Jews, nor was Denis.

He had nothing against Judaism or Jews, but was deeply disappointed with the response of Jewish community representatives. They failed to denounce apartheid early, finally only weakly and shied away from defending the Jewish white activists who were arrested.

Attitudes, however, are malleable. Ronnie Kasrils, another Jewish activist and ex-South African Minister for Intelligence Services, wrote that Israel arranged Denis’ release from prison. After being freed, he was flown directly to Israel where his daughter was living.

His achievements were many. His work for the anti-apartheid struggle immediately after his release from prison comes to mind as does his Community H.E.A.R.T. (Health Education And Reconstruction Training). The latter raised millions of Rand and gave 3 million books to disadvantaged children. His magnificent ‘House of Hope’ in Houtbay for the young continues his legacy of work for children.

I also recall his numerous relaxed lectures, which impressed listeners world-wide. This was matched by his integrity. He was not one to remain silent when things went awry within the leadership of his party, the African National Congress. He openly denounced corruption and called for the resignation of former President Jacob Zuma, his “once brave comrade”.

I remember when he and dear Esme, his first wife and my friend, joined a group of other friends in the Isle of Wight when I turned seventy. He was angry when everyone contributed to the cost of a bus we hired and did not want him to pay because he our guest of honour. He insisted on contributing towards the bus rental. It was the first of many visits to the Isle of White during the following 25 years. Unfortunately, the last visit was in December 1999. They cut the visit short because of Esme’s illness – a stroke ended her life only a few weeks later.

My friendship with Denis continued, after he had moved to the Cape, I to Germany. He honoured me when he missed a birthday of Mandela to attend the Aschaffenburg City Council’s naming of  a secondary school (Realschule) in my name. Denis also honoured me with his presence at the Jewish Museum in Cape Town for the opening of an exhibition of myself and the launch of my biography in English.

There is so much to say about Denis – about his love of life, his laugh, his good nature, humour and his warmth and empathy. I would like to echo a Yiddish phrase Jeremy Cronin, a fellow prisoner with Denis used: he was a mensch.

The News from Ruth Weiss