All the best to Tsitsi Dangarembga! 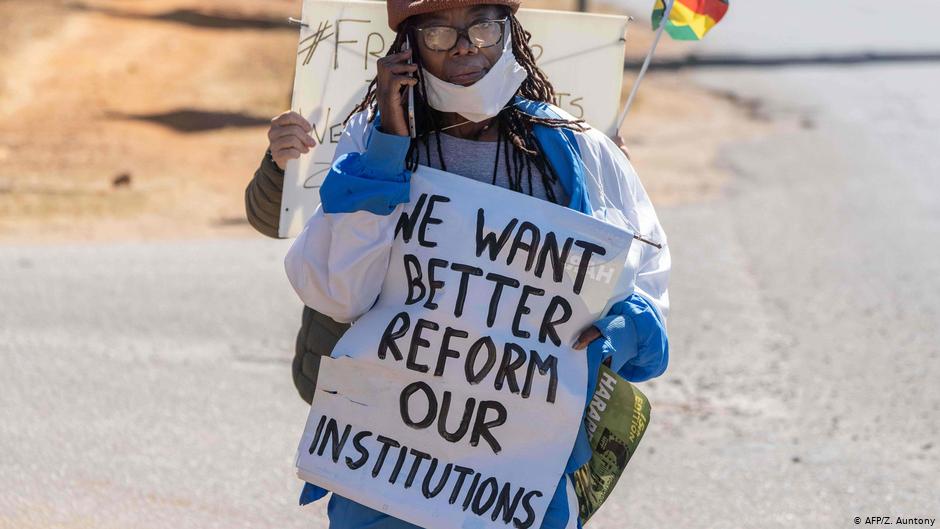 Tsitsi Dangarembga at the demonstration in Harare in July

Firstly : TO TSITSI DANGAREMGBA : CONGRATULATIONS FOR “THIS MOURNABLE BODY”, SHORTLISTED FOR THE BOOKER PRIZE! IT IS WELL DESERVED FOR A TIMELY NOVEL THAT COMPLETES A REMARKABLE TRILOGY – AND HOPEFULLY IS HEADING TOWARDS THE PRIZE ITSELF.

What irony that Zimbabwe’s government is not only scathing of its foremost writer, but that it arrested and charged her at this important moment in her professional life with a number of accusations, including an alleged attempt to topple a ”democratically elected government.”

Others see Tsitsi’s‘ peaceful demonstration and that of others for what it actually was: a demonstration against the appalling record of President Emmerson Mnangagwa’s government’s human rights record, the desolate state of the economy and corruption – in particular that concerning Covid-19 aid, that should have gone to the poor.

Tsitsi deserves our admiration and needs our good wishes! As I expressed these to her when I read of her arrest she took the time to reply by return:“Thank you for your lovely message. It is exactly what I needed to hear.”’ Should she be found guilty – hard to imagine based on the facts –  it is vital that those who matter in the international community – including PEN Organisations – express adequate solidarity and pressure for Tsitsi and  freedom of  speech in Zimbabwe.

Tsitsi’s protest and demand for reform of her country’s institutions took place on the day of  the planned opposition demonstration. Mnangagwa’s government  chose to regard this as treasonable, cracking down hard on activists with his security forces one day prior to ensure that the protest would not take place. The majority thereupon remained at home and busied themselves with protests on the internet. Tsitsi, however, felt this impinged on her civil rights. Fully aware of the risks she’d incur, she dared to defy the threat and inevitable fate that overtook her within a brief span of time after her appearance with her placard on the street.

She is to be saluted! The courage to stand up for one’s conviction is not given to everyone. Tsitsi Dangaremgba is one of these admirable human beings who did so.

“South Africa’s revolution of change has not yet ended”

After fleeing Nazi Germany, the 94-year-old journalist and author grew up in South Africa and dedicated her life to combating racism. Weiss tells DW about her upbringing and her thoughts on democracy in her country.

“We have to talk about problems”

Ruth Weiss fled from the Nazis in 1936 and headed for South Africa, where she later campaigned against apartheid. She now lives in Germany. DW spoke with her about racism in Africa and multicultural interaction.